The electronic cigarette, also called vape, e-cigarette, e-cig or e-cigarette, is a mechanical-electronic device developed with the purpose of simulating a cigarette and the act of smoking.

It is a device that produces inhalable vapor with or without nicotine, presenting several flavors (e.g. peppermint, coffee, fruit, etc.) and can serve as an alternative to the smoker, as well as delivering nicotine taste and physical sensation similar to that of inhaled tobacco smoke, although there 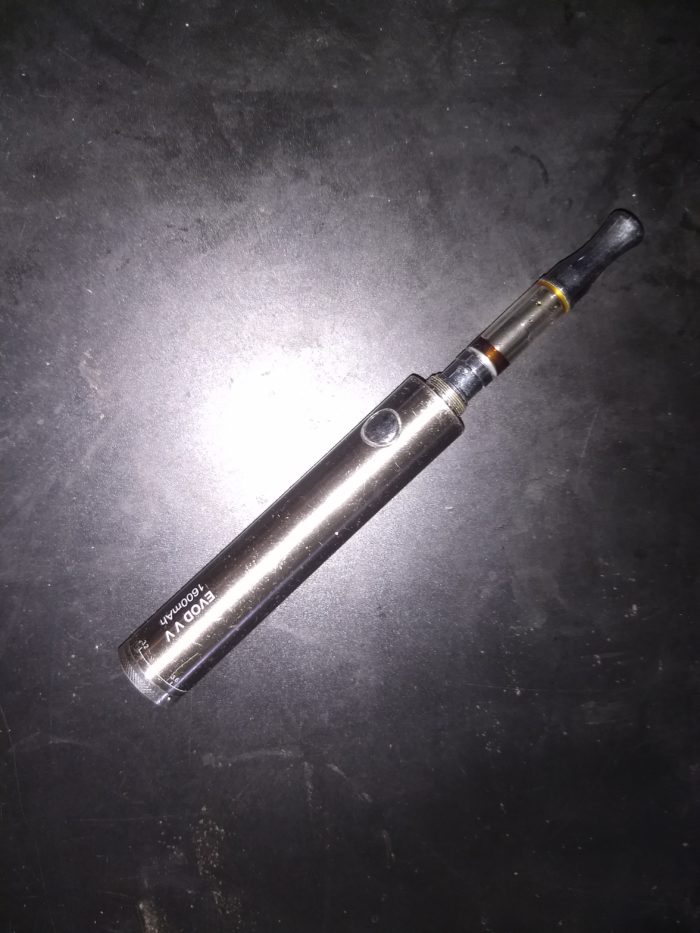 is no tobacco, combustion and smoke. Also, electronic cigarette mimics the habit of smoking, which for many smokers is one of the obstacles to success in smoking cessation, however, it does much less harm than tobacco because of its composition with far fewer toxins.

The classic model of the electronic cigarette is visually very similar to the true product, that is, it has the same white and yellow color, the same shape and even the tip pretends to be on when drawn upon. However, this model has already fallen into disuse, giving rise to “box mods”, which have the same functioning of the electronic cigarette like a normal cigarette, but with temperature and adjustable voltage, and, in most cases, with replaceable battery. In addition to these, there are several models available in the market, and the so-called electronic cigarette goes beyond offering an alternative to the smoker of conventional cigarettes, since there are also devices in the form of cigars, cigarillos, pipe, among many other formats.

The electronic cigarette consists basically of three parts: a battery with some electronic components, a vaporizer (also called atomizer) and a cartridge, which works in the same way as nicotine gum and stickers, gradually delivering this substance to the smoker.

In most models, the battery of electronic cigarettes is connected to a sensor that detects the suction performed by the user, which activates the atomizer and starts to vaporize the liquid contained in the cartridge (called e-liquid or e-juice), and then inhaled by the user. Also, this sensor activates a LED (small light device), usually of orange color, located in the tip of the cigarette. With this, the electronic cigarette simulates the real act of smoking very well.

E-liquid or e-juice is a liquid more viscous than water, has a high surface tension and has the property of being easily vaporized and is therefore used as vehicle to reach the lungs.

In most e-liquids the main component is propylene glycol, followed by glycerin, water, nicotine and flavoring, which give the flavor and aroma. E-liquids therefore do not present tar, carbon monoxide and any of the other substances commonly found in tobacco products.

The FDA  (The Food and Drug Administration) has long recognized that this substance is safe for human use in food, cosmetics and medicines (including inhalants), being widely used by various branches of industry. Among other examples, this substance is used as a solvent for food coloring and flavoring, as a food preservative, as a non-toxic antifreeze, as a moisturizer in medicines and cosmetics, in toothpaste, mouthwashes as a fixative for perfumes and is also used in machines that simulate smoke. In e-liquid, propylene glycol is used to produce steam and carry flavor and aroma, and the inhalation poisoning of propylene glycol is not of concern. Still, propylene glycol does not cause sensitization and does not present any evidence of being a carcinogen, however some individuals may present allergy to this component

Also called glycerol, it is a hygroscopic, odorless, viscous and sweet-tasting substance, widely used by the industry as a humectant, solvent, softener and food and beverage additive and in the medical, hospital and pharmaceutical area in ointments, elixirs, syrups, anesthetics, etc. Glycerol has been recognized as safe for human consumption since 1959 and can be used in various food products for a wide range of purposes. Several studies have shown that a large amount of glycerol (synthetic or natural) can be administered without the appearance of any adverse effect to health.

Generally distilled water is used in e-liquids, although that in reduced quantities.

A basic alkaloid substance similar to caffeine contained in liquid, yellow coffee found in certain types of plants, especially in tobacco, but is also detected in small amounts in tomato, potato, eggplant, cauliflower, in some teas, among others. In e-liquids the amount of nicotine varies from 0% to 18% being diluted with the other components of the liquid. When consumed through tobacco, it manifests itself in two distinct ways: it has a stimulating effect and, after some deep swallowing, has calming effect, blocking stress. Its use causes psychic and physical dependence, causing uncomfortable sensations in abstinence. In excessive doses, it is extremely toxic: it causes nausea, headache, vomiting, convulsion, paralysis and even death. The lethal dose (LD50) is 0.4 mg / kg in adults.

They are substances (natural or synthetic) or mixtures that added to a food or medicine give them a characteristic flavor and aroma. They can be natural (essential oils extracted from plants and natural fruit flavors) or artificial (aromatic alcohols, aldehydes, balms, phenols, terpenes, etc.). They are widely used by the food and pharmaceutical industry.

Smoking, that is, tobacco smoking is a serious health problem in the world, because:

Regarding the electronic cigarette, although the health effects of its use are not fully known in the scientific field, several studies have demonstrated that this device presents enormous advantages with respect to tobacco cigarettes, because, precisely because it does not have tobacco or combustion, presenting only nicotine, brings a series of:

Several studies have failed to prove that nicotine alone, as in drugs used in nicotine replacement therapy, causes significant harm to the cardiovascular system. In addition, some studies have suggested that nicotine appears to be beneficial in a number of ways, for example in stimulating recovery from brain damage in Parkinson’s disease and Alzheimer’s;

Propylene glycol, the main constituent of the e-liquid used in electronic cigarettes, has known bactericidal and antiviral properties and can protect people who use electronic cigarettes from colds and respiratory infections, while tobacco smoke doubles the risk of death in an epidemic of influenza and lastly, it is cheaper than tobacco cigarette.

Among the studies highlighted, the pioneer “Safety Report on the Ruyan® e-cigarette Cartridge and Inhaled Aerosol” conducted in New Zealand with the help of Canada in 2008 by Dr. Murray Laugesen has shown that the electronic cigarette, designed to be a safe alternative to smoking, “is very safe in relation to tobacco cigarettes and also very safe in absolute terms in all measures that we have applied in this study.” In addition, the same researcher has conducted further studies and discussions in which he confirmed the safety of electronic cigarette, proving scientifically once again that electronic cigarette has no toxic levels of harmful substances to human health.

However, in this same context, in May 2009, the Food and Drug Administration (FDA) conducted a study that tested the content of 18 varieties of electronic cigarette cartridges produced by two US suppliers NJoy and Smoking Everywhere (a now discredited website) and found results trace amounts of the substance diethyleneglycol in one of the cartridges manufactured by Smoking Everywhere, as well as traces of tobacco-specific nitrosamines (TSNA’s) known as cancer causing agents in all cartridges of one brand and two of the cartridges of the other brand. The study also found that actual nicotine levels did not always match the amount of nicotine the cartridges were said to contain. Further, the analysis found traces of nicotine in some cartridges that were said to be without nicotine and other concerns were raised about inconsistent levels of nicotine delivered when in use.

As a result, in July 2009, the FDA issued a press release discouraging the use of electronic cigarettes, repeating the above concerns, stating that e-cigarettes may be attractive to the young public and do not have adequate warnings about the risk to health. Most recently their new campaign is “The Real Cost.”

However, the aforementioned 2008 study by Dr. Murray Laugesen had already concluded that the traces of TSNA’s found in electronic cigarettes do not come close to reaching cancer levels and that the same amounts of TSNA’s are found in already approved nicotine replacement therapy by the FDA itself, such as nicotine chewing gum. In addition, the 2009 study by the same author showed that the toxic emission score, which is based on 59 toxic substances, was 0 (zero) for the electronic cigarette, in contrast to 126 for the Marlboro cigarette brand and more of 100 for other brands.

In addition to Dr. Murray Laugesen, several individuals and organizations questioned the FDA study and filed for electronic cigarette: “A group of prominent physicians and tobacco researchers, including Dr. Michael Siegel of the Boston University School of Public Health, Dr. Joel Nitzkin of The American Association of Public Health Physicians (AAPHP) Tobacco Control Task Force and Dr. Brad Rodu, Endowed Chair of the Tobacco Harm Reduction Research University of Louisville, challenged the FDA to provide full quantitative study data on which the FDA based its warning against electronic cigarettes. They further claimed to be concerned that the FDA falsely incriminated electronic cigarettes through a partial presentation of scientific data, causing a significant negative impact on the public perception of electronic cigarettes, while the best available evidence has shown that the devices offer great potential to reduce serious health problems among traditional tobacco smokers.”

Vaping as an alternative to cigarettes

The FDA on ecigs

Finally, the Electronic Cigarette Association ruled that the FDA test was too limited to reach valid and reliable conclusions. To prove this, he hired the company Exponent Inc. to review the FDA study. Thus, after analysis, Exponent Inc. has evidenced that the FDA studies, “in summary, suffers from several limitations, which together result in failure to properly support the adverse effects of electronic cigarette on health and its consequences, compared to medications for nicotine replacement therapy already approved by FDA itself in the past. ” Thus, Exponent Inc. concluded that the FDA study had no basis to support the claims of potential adverse health effects in the use of electronic cigarettes.

As if that were not enough, the FDA classified electronic cigarettes as being drug-releasing devices, being subject to regulation under the Food, Drug and Cosmetic Act (FDCA) to be imported and sold in the United States. Next, this classification by the FDA was challenged in court and overturned by Judge Richard J. Leon, citing that “devices should be regulated as tobacco products rather than drugs and drugs.”

In March 2010, the US Court of Appeals suspended the injunction pending an appeal, during which the FDA argued the right to regulate electronic cigarettes based on its previous ability to regulate nicotine replacement therapies such as gum nicotine or adhesives. In addition, the agency argued that tobacco legislation adopted in the previous year “explicitly excludes any device that is a drug or combined product from the definition of ‘tobacco product’ and provides that such objects must be regulated under pre-existing provisions of the FDCA (Federal Food, Drug, and Cosmetic Act).”